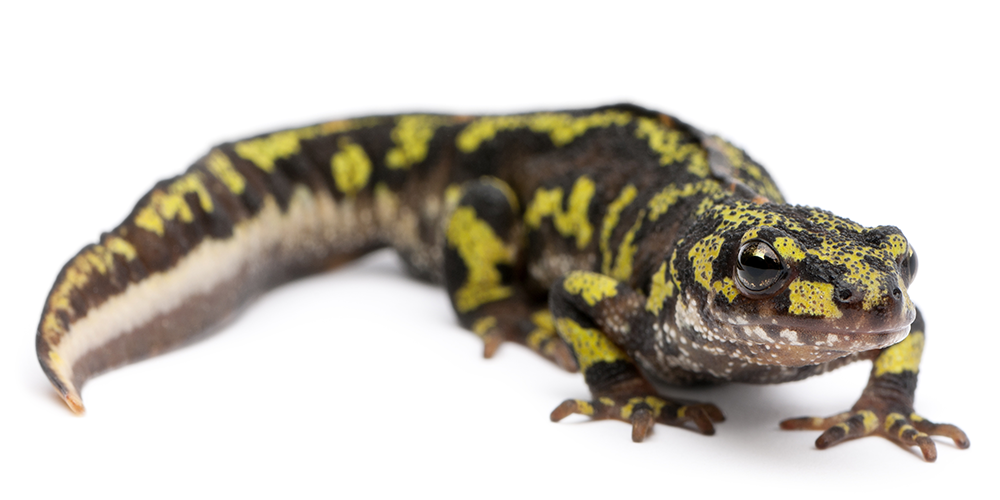 The North American Bsal Task Force was initiated at an international workshop (June 2015: USGS Powell Center, Fort Collins, CO, USA: 29 participants from North America, Europe, Australia) focusing on emerging management, policy and research implications of Batrachochytrium salamandrivorans infectionof amphibians. The workshop made great strides in developing an objective decision-making process to guide Bsal response actions (with a focus on the USA), and organized seven working groups to partition additional efforts that would together become a larger strategic planning effort. These working groups were (Fig. 1A): Surveillance/Monitoring; Diagnostics; Data Management; Response; Outreach/Communication; Research; and Decision Support. There was considerable interaction envisioned among Working Groups (Fig. 1B) as their tasks were to be better framed after the June 2015 workshop, with broad participation encouraged from members outside of the initial Fort Collins workship – inclusive of international participants. Each Group eventually was projected to contribute an appendix to an overarching Bsal Strategic Plan, that is a topic for further discussion in Spring 2016.

Leads of the seven Working Groups and select other members from interested partner groups were assembled to form the Technical Advisory Committee (Fig. 1A) of the Bsal Task Force. The Technical Advisory Committee has members who provide communication links among Groups and with other interested parties relative to Bsal or amphibian disease developments. These include US State and Federal agencies, non-governmental organizations, research institutions, zoos, and the pet industry.  Partners in Amphibian and Reptile Conservation also developed a Disease Task Team in 2015, for both amphibians and reptiles, and they have been taking on some Bsal coordination roles as well, working with the Outreach/Communication Working Group specifically, and with issues that arise that are not directly related to Bsal Working Groups. The Technical Advisory Committee meets monthly to provide updates among Groups and other parties. 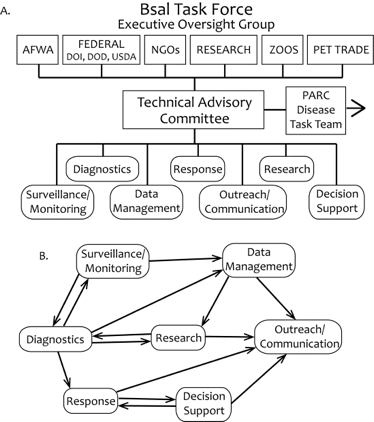 A need to act under uncertainty is a hallmark of wildlife disease management, and the use of a formal decision process can explicitly examine trade-offs between managing with imperfect information and waiting to gain information to improve future decision making, and identify trade-offs among other objectives which must be considered alongside disease responses. As knowledge accumulates on the distribution, susceptibility, and response to management interventions, more effective and efficient strategies may be implemented.  The opportunity to proactively manage salamander populations is a notable aspect of the Bsal crisis that should serve as an example in other realms of emerging infectious diseases of wildlife.  The decision science group can work with managers and decision makers to improve the identification of optimal response actions, and develop adaptive management strategies which will improve disease response. Read more on the Decision Science Working Group page.

The Response Working Group intends to serve as a resource for issues related to early detection and rapid response (including, but not limited to eradication, containment, or other management response) should Bsal be detected in North America. The group has recently finalized a Bsal Rapid Response Plan Template, intended for customization by management unit or captive salamander facility, which provides guidance for suggested actions upon a salamander mortality event or confirmed Bsal detection. Read more on the Response and Management Working Group page.

Download the Bsal Rapid Response Plan Template HERE. The group, along with other members of the Bsal Task Force will be actively working with partners to assist in preparing their customized plans using this template. For questions or assistance, please contact Response Working Group Lead, Priya Nanjappa (pnanjappa@fishwildlife.org).

The Research Initiatives group has developed Standard Operating Procedures for laboratory studies with Bsal. It has also prioritized research topics in order to understand the biology of the pathogen, to determine which host species are susceptible, and to mitigate Bsal’s effects if it arrives in North America. Read more on the Research Working Group page.

The diagnostic committee is responsible for the development and updating of current methods to determine infection and disease of a potential animal with Bsal. This group has provided the case definition for the pathogen and will be responsible for coordinating the efforts of diagnostic laboratories across the world for Bsal detection.  Read more on the Diagnostics Working Group page.

The Bsal Data Management Working Group is initially focused on development of an online amphibian chytrid fungus data portal (amphibiandisease.org) at AmphibiaWeb. The portal will be available for international users, for interactive reporting of the results of both Bsal and Bd studies, including a mapping tool to portray occurrence, prevalence and Bd and Bsal test results in any swabbed amphibian. Secondly, the mapping tool will be developed further to display the geographic and taxonomic scope of surveillance projects, with the intent to inform scientists and managers of ongoing or planned efforts. This tool will dovetail with the Surveillance/Monitoring Working Group, in order to show larger efforts, in particular. Users will be able to import, visualize, and share their data, to facilitate disease research. Third, the web portal is intended to be an important online access point for communication of Bsal knowledge and activities, and is working with the Outreach/Communications Working Group. For example, a Bd and Bsal literature bibliography is being compiled (using zotero.org), and will be accessible at the portal. Read more on the Data Management Working Group page.